Get ready for super-powered dose of mega-cuteness.

A while back, during one of my many moments of searching eBay for Batman figures I don't have yet, I came across a listing for an adorable, chubby-cheeked, cherubic version of the Caped Crusader from the good folks at Fisher-Price (I would later see the Batgirl and Wonder Woman figures on Bubbashelby's blog, Toyriffic). And it was priced as if it was made out of 14k gold, so I passed on it. Well, over time, many more popped up on eBay, all a little too pricey for me (like, $15 for one figure), and since my area of the country is overrun by scumbag neckbeard scalpers and the fact that my nearest Toys R Us just closed (which I have mixed feelings about since it was such a horrendously bad TRU, but then again, it was all I had), I never did find my Campbell's Soup-kid look-alike Bats.

Then I took another business trip to San Diego, and on a whim, swung by a TRU just to see what they had. And lo and behold... 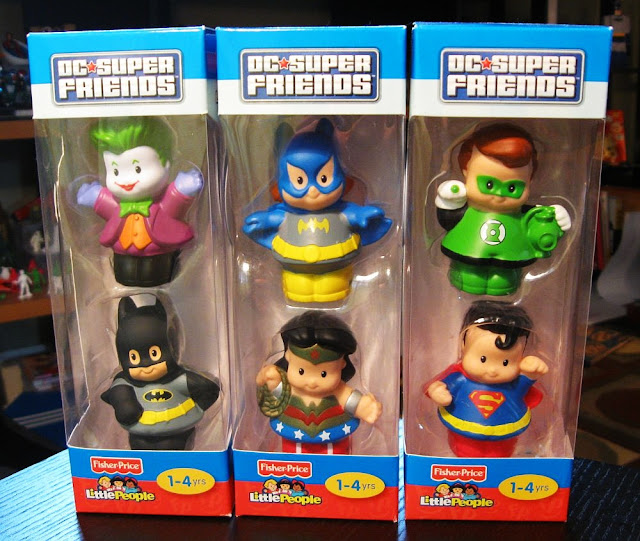 Ho... lee... Toledo! Are these figures cute! Now, I don't normally go in for buying infant/toddler toys, but since I've been going through a major DC Comics phase lately (thanks in part to Lego, which I'll blog about later), I just had to get them all. They rang in at $5.99 each, meaning two figures in each box, obviously, which is a price I can totally get down with.

That Batman is by far the cutest Batman in my entire collection. Totes adorbs. 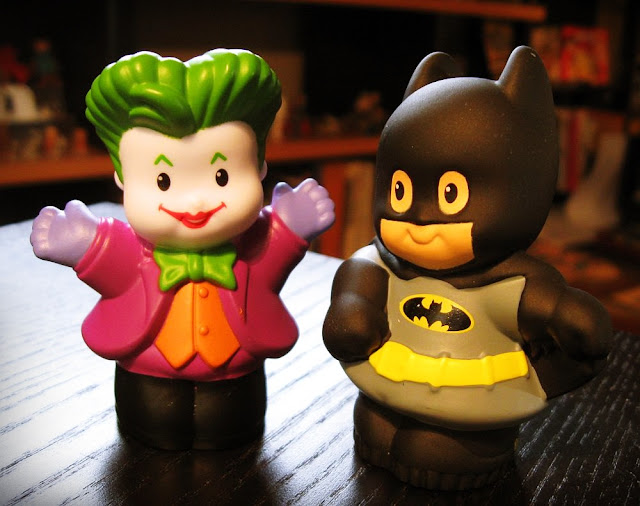 I love the girls 2 pack, featuring Wonder Woman and Batgirl, which marks only the 2nd Wonder Woman figure in my collection (next to my vintage Super Powers figure). 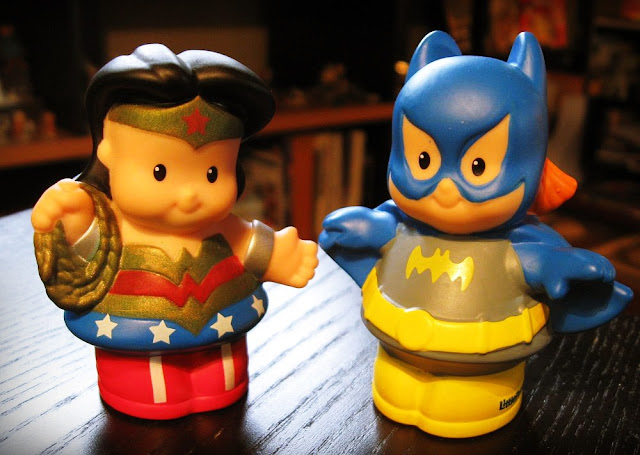 And in yet another attempt by the universe to get me to stop hating Superman (the first swing that chipped away at my anti-Superman ice shield hit like the pick-axe of the Gods with the release of Mattel's Retro Action Superman, a figure I grudgingly bought and now dearly love), I have no choice but to adore this little button-eyed cutie in red and blue.

The Green Lantern goes without saying but seriously, take a good look at him, doesn't he look like that guy who plays "Cam" on Modern Family. Just sayin'. 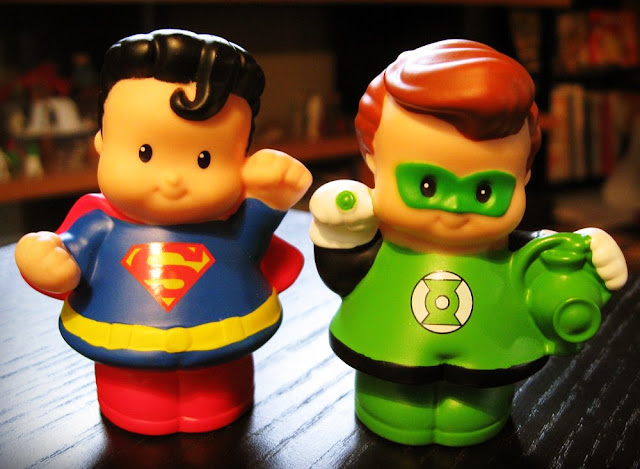 So that's that for my latest toy score from my trip to sunny California. Lots more stuff to get too, but I'm afraid after today's raw, unadulterated cuteness, everything else I blog about from here on out is just gonna seem butt ugly.

Thanks for reading!
Posted by Reis O'Brien at 6:00 AM 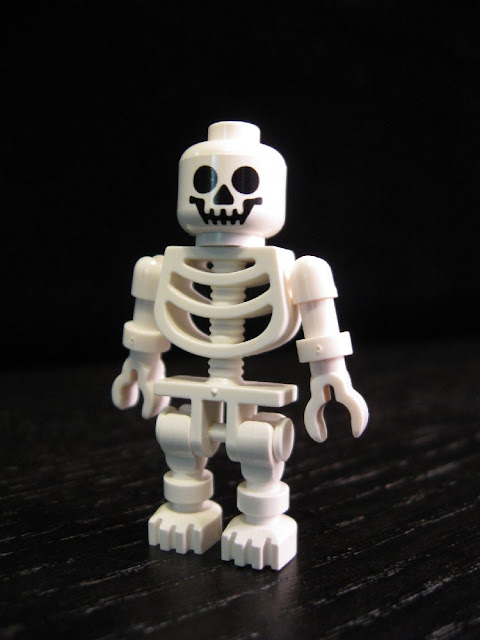 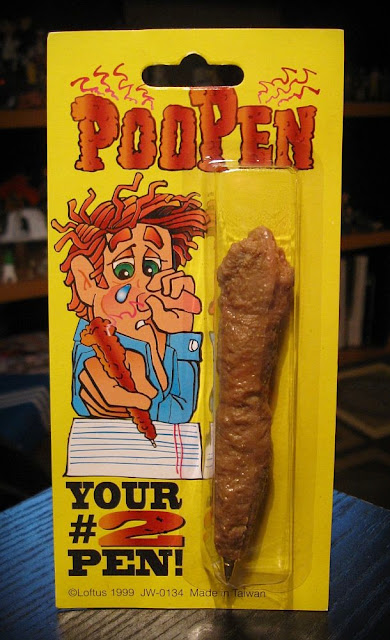 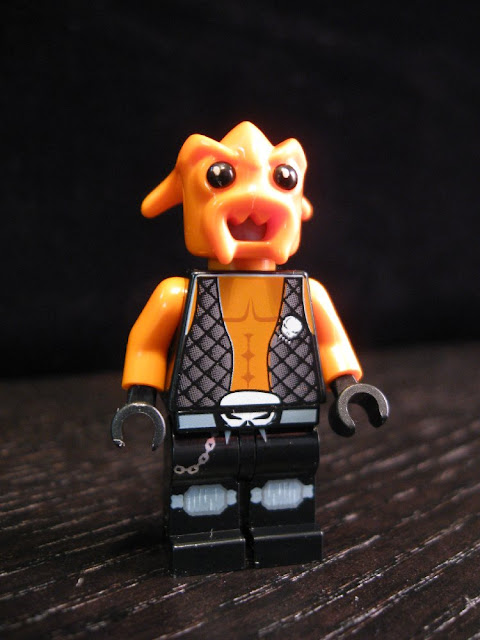 Today's article is all about a series of toys that I not only never owned, but never even heard of until a couple of months ago.

It was during one of my trips to San Diego when my boss and I were talking about our favorite things from our childhoods (a common theme that we two nostalgia nerds revisit often), things like Pop Rocks back when the candy was called Cosmic Dust, or the smell of a freshly opened pack of baseball cards. While we were delving into the foggy mists of kid-dom, he told me about these collectible styrofoam toy airplanes that he used to buy at the local drug store. I thought he was talking about the classic balsa wood gliders from my youth, but him being 10 years older than me, he was recalling a toy from another generation.

He described them to me in vague terms; he knew they were sold in flat packs, and that they were made of of a bunch of zany designs (being released in the heyday of the weirdo gross-out era with the likes of Wacky Packages and Rat Fink hot rob designs), such as things like a hot dog making up the fuselage of the "airplane" with grilling forks for wings, and one that was a disgusting foot with a band-aid for a rear rudder.

Naturally, knowing my toy collecting history, I thought he was nuts. But after some serious digging (I had no name to search for at all), I stumbled onto a pic of a toy styrofoam airplane made up of a giant nose with a massive mustache for a wing with then name "Topps Flying Thing".

A-HA! And just like that, I was off! It turned out that once I knew the name, these things turned up with some degree of regularity on eBay, so after skipping a few over-priced (for me, anyway) auctions, losing a couple outright, and passing on some less than stellar examples, condition-wise, I finally landed a lot of Topps Flying things just in time to give them to my boss for Christmas.

Here's how they looked packaged... 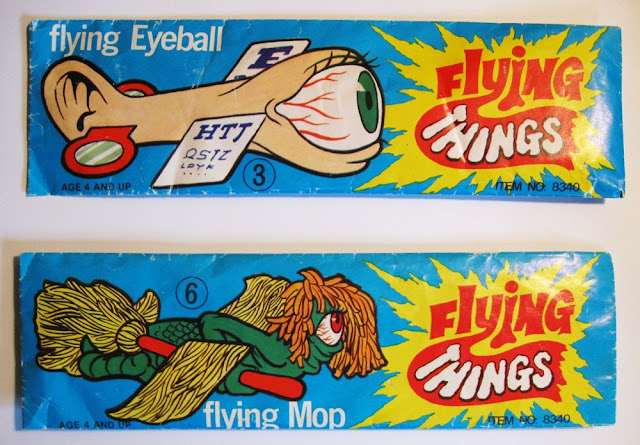 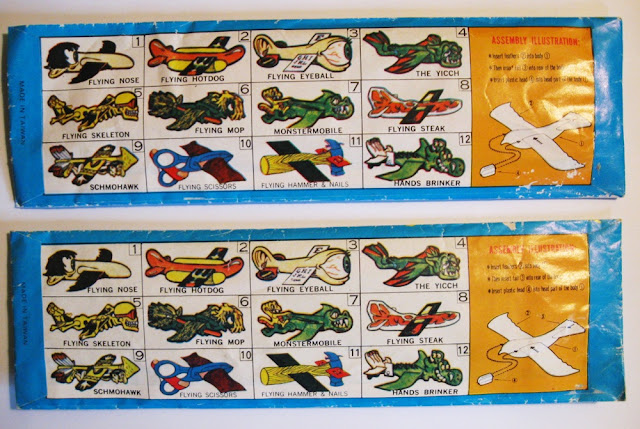 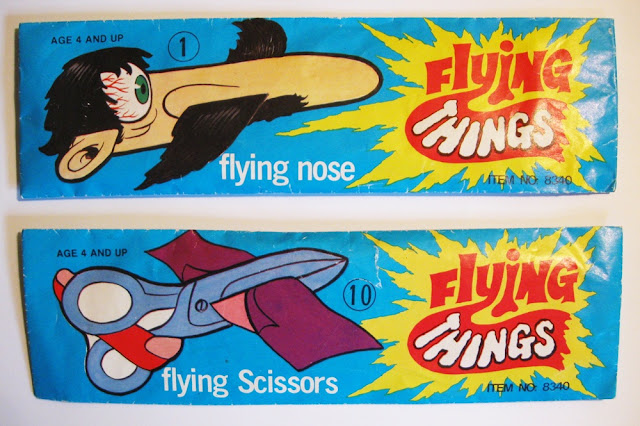 The "collect them all" checklist on the backs are a priceless source for knowing which ones were out there. As you can see, I didn't get all of the ones available, and I have a couple not listed on the backs of these packages, so I suspect that there were more than one series, possibly several.

Through a little research, I managed to discover that originally, these were sold blind-packaged (like baseball cards, and how my boss remembered them) and you never knew which one you would get. Later, Topps would just show the kid what he/she was about to plunk down a hard-earned dime for right on the front of the package.

Also, I scored these in two different lots; the sealed ones (shown above) and the loose ones shown below. The sealed ones that I scored are decidedly smaller than the loose ones, making me think that these were probably a later release and a way for Topps to save a little production cost.

I just recently learned that Playing Mantis re-released these a few years ago. So I guess they weren't that unheard of.

The loose ones are priceless. I have to say that so far my favorites are the bacon and eggs and the mustache guy. That sock/foot/boxing glove/green face thing is just born out of a damn nightmare, though. 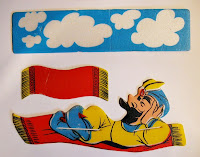 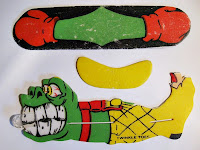 Of course, we had to build them all right there when I gave them to him (it was an awesome moment, by the way, when he opened them. It was as if 40 years of great memories flooded back into him all at once and I could see it as he let out a long slow breath, winded from the g-forces one is subjected to when instantly flung back in time). 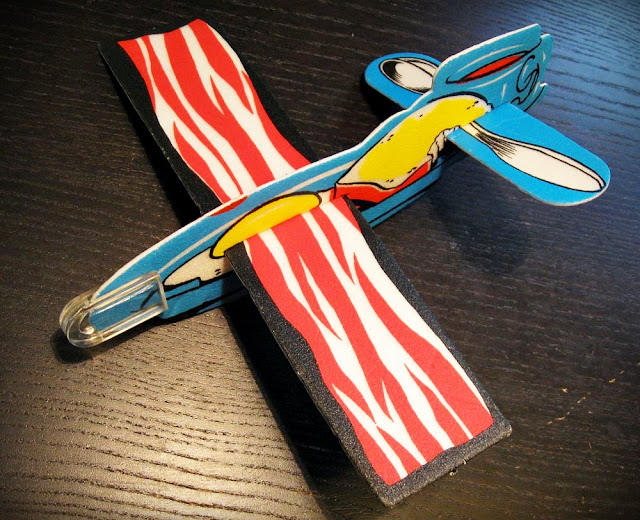 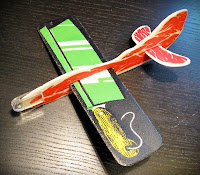 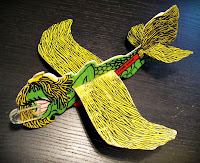 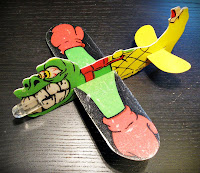 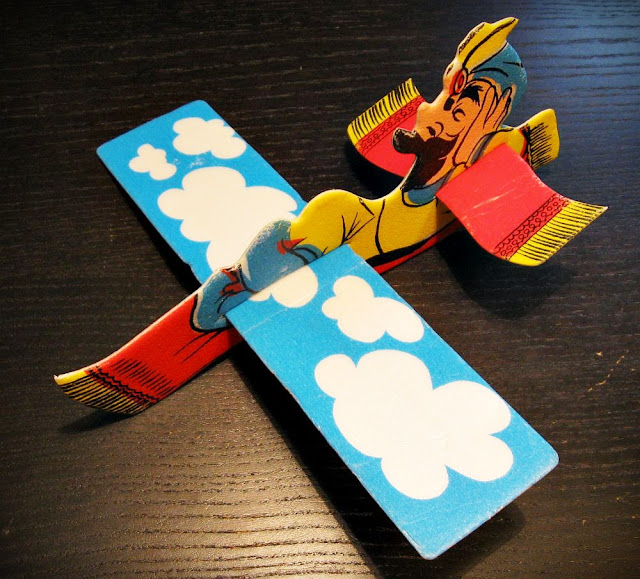 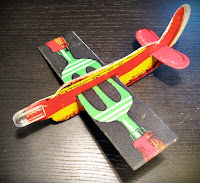 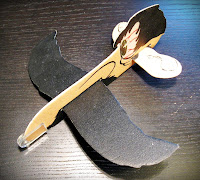 It was a very special moment for me as a toy collector and lover of toy history. I got to learn a ton about an almost forgotten toyline, and I got to reunite a good friend with a beloved piece of his youth. And in those occasional moments when I look around at all of the vintage plastic I have accumulated and briefly wonder, why am I doing this? Well, this is exactly why I do this. To remind myself, and the people that matter to me, that just like plastic, and in this case, styrofoam, absolute unadulterated fun, if truly embraced and enjoyed, lasts forever. And these are the objects that at first spark that fun within us, and can eventually, with just a little digging, remind us of what it was like back when it made sense to fly a hot dog.
Posted by Reis O'Brien at 6:00 AM 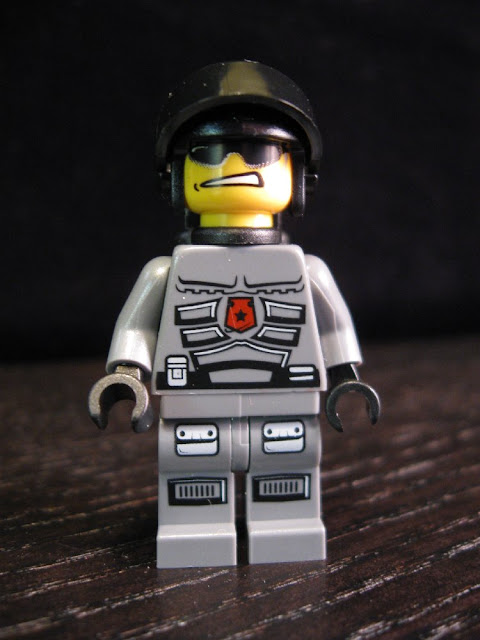 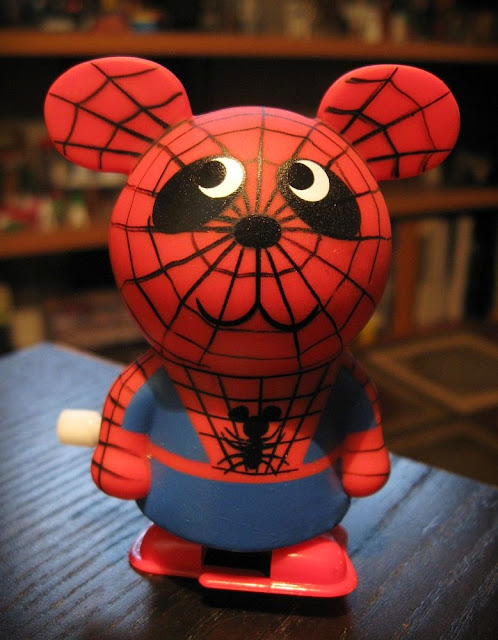 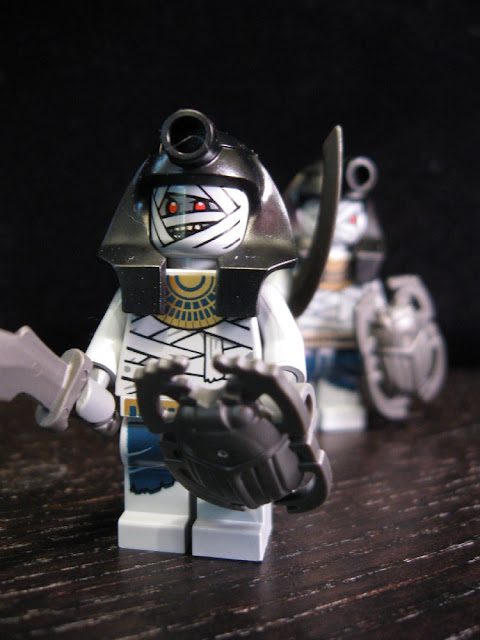