I've managed to find about 10 minutes to squeeze in a quick post for my favorite weekly feature (that I miss dearly), and this week's assignment is simply titled Star Trek.

Unfortunately, I have never been a fan of Star Trek. Despite my penchant for green women, Star Trek has never really impressed me.

The original series bored me as a kid, the Next Generation stuff was even worse (and it was crammed down my throat thanks to a Trekker roommate), and pretty much all of the movies were lame-o (although Wrath of Khan had its moments).

However, I did honestly enjoyed the latest reboot movie, and look forward to the new one. So I guess my distaste for Star Trek is 100%.

Still, I wracked my brain trying to think of something Trek-ish that I could post, and the only thing that I could come up with is a quick pic of the only remotely Star Trek related collectibles I own; my Captain Snoopy and Woodspock Funko Wacky Wobblers... 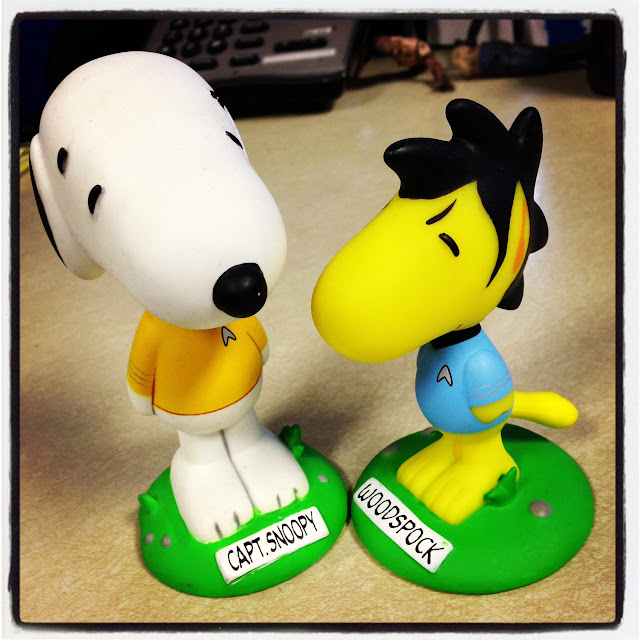 And I gotta be honest, I only have these because I'm a Peanuts fan.

But that just goes to show how powerful the legacy of Star Trek is; When a person who actively avoids and is inherently repulsed by a certain franchise and he still ends up with at least a couple of collectibles on his shelf touch by the very thing he tried to avoid. Star Trek, whether I like it or not, is everywhere.

From the other League Trekkies...