Ever since I posted about that Dungeons & Dragons Colorforms set that I scored a while back, I've been going a little Colorforms crazy. I mean, I've only really bought two more setsd, but I keep searching them on eBay and think I may have to pull the trigger on a few more. Maybe I have just found myself a little side collection. Great. That's all I need.

Anyway, to be honest, I'm not even sure if Colorforms counts as a toy, since it's sort of part playset, part craft set and even has hints of boardgame-ness to it. I guess since it's made to be be played with, and in such a way as to incite imagination and adventure, that's enough for it to be posted here on my toy blog.

Today, I'm talking about a recent acquisition that instantly transported me back to Christmas of 1982, when just a few weeks before I had discovered a new-found love for a new toy line called G.I. Joe: A Real American Hero. By 1982, I was still deep in the throes of Empire Strikes Back love, but that had been somewhat diluted the previous Christmas by Masters of the Universe, and both of those franchises would take a major hit from my sudden lust for all things G.I. Joe.

I had discovered G.I. Joe completely on my own, which was a rarity, usually being influenced by one of my friends, or some kid at school or even a Saturday morning toy commercial. But the very first time I had seen a Joe figure was when I stumbled upon them at a Woolworth in Adrian, Michigan in early December of '82, with a wad of birthday money burning a hole in my pocket.

They were like nothing I had ever seen. They were a whole new departure from my Star Wars & MOTU figures, with their para-military look, their better articulation and their personal armories of deadly weapons. I had a cool $20 in my pocket (a fortune to a soon-to-be 10-year-old back then), so I picked up Stalker, Scarlett, Snake Eyes, Rock-n-Roll and Grunt.

I then ran home and declared to my Mom that I was now an official flull-blown G.I. Joe fanatic and that's all I wanted for Christmas that year, which turned out to be a blessing for my Mom because she had been banging her head trying to figure out what I wanted that year, and quite frankly, I had no idea. Needless to say, that Christmas was all about G.I. Joe, but I'll save that story for another time.

But one toy that I got that Christmas that I do want to talk about right now was my G.I. Joe Colorforms action playset! 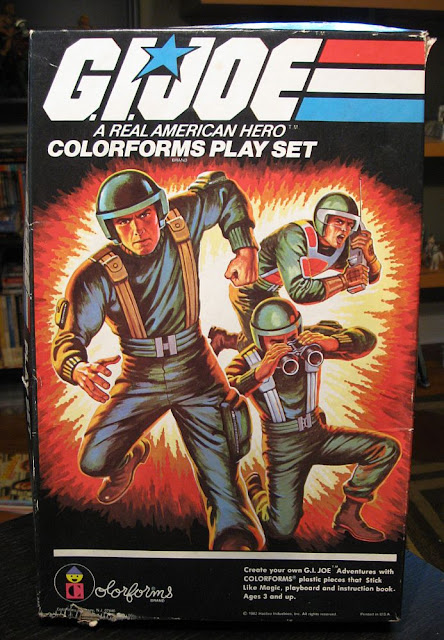 Colorforms were a weird toy. I remember getting a new set every Christmas, the only reason for which (because I never asked for one) was that they were probably easy to find and cheap, two aspects that parents love at Christmas.

Still, I always went "Oh! Yeeeaaahhhh!" every time I opened a set. Granted, they were the type of toy that got stacked in the I'll Get Around to Playing with This Later pile in my bedroom, while the next few days were completely sucked up by action figure adventures and hand-held LCD game tournaments. But eventually I'd end up cracking the Colorforms box open and spend a couple of hours carefully choosing where each piece would go and trying to come up with a halfway decent adventure scene. Once that was done, I'd then try to make a different yet equally adventurous scene, but the realization would set in that the pieces and the scenery pretty much worked one way.

Then the box would get sent away to the purgatory that was our cabinet full of board games, to be played with never again, but still, never quite truly forgotten...

Now I find myself with another G.I. Joe Colorforms set, just like the one I had all those years ago, and maybe it's the rosy glow of my nostalgia-goggles, but this set is 10 times as awesome as I remember it. 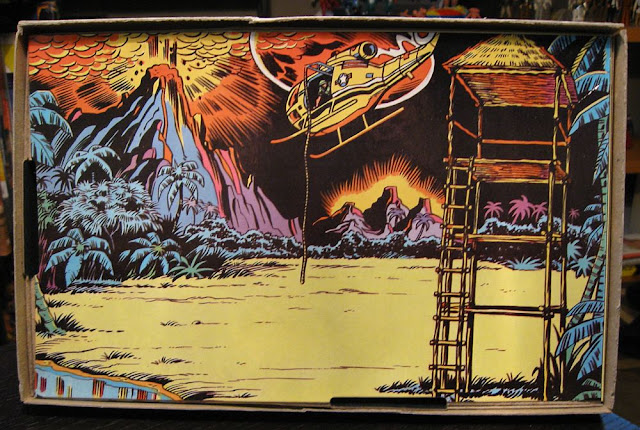 The set, like all Colorforms, comes with the usual static background, in this case involving some sort of '80s-style jungle warfare scene that for some reason required an exploding volcano.

The sets also came with several die-cut vinyl sticky thingies in the shapes of your favorite heroes such as Striker, Scarlett & Snake Eyes below.... 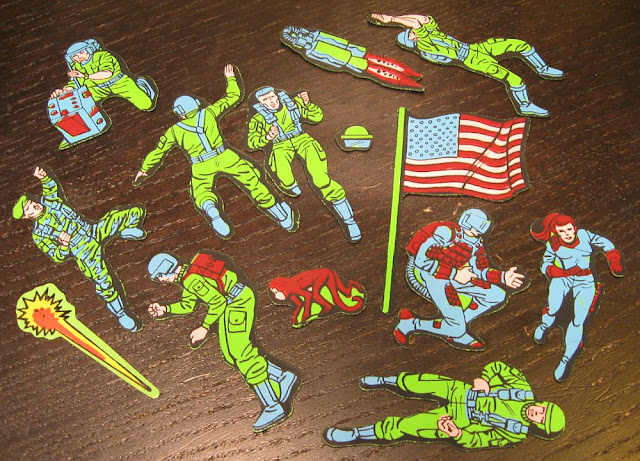 The vinyl pieces that came with these sets were always very simply illustrated and colored, and always came on two different colored sheets, in this case green and yellow. To be honest, this is one of the things I find so charming about Colorforms nowadays. It's almost like looking back on a forgotten form of American folk art.

How random are some of the items included in this set? A shovel? A flying eagle? And of course, the obligatory monkey. 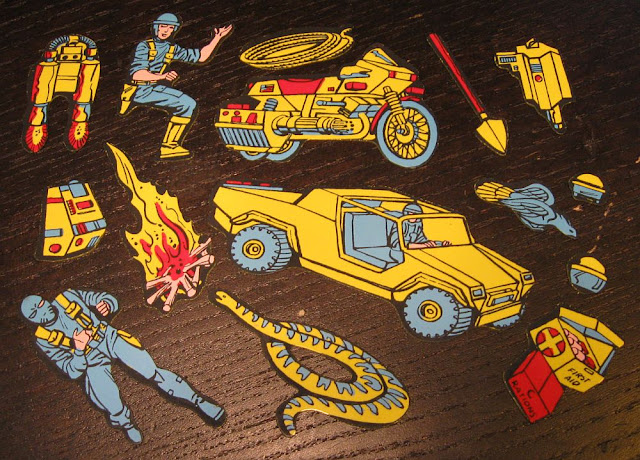 The funnest part of this particular set, which I scored on eBay, was that I had bought it without seeing the insides, but I was okay with that since the seller claimed it was complete and it was hella cheap. So imagine my surprise when I find these two extra sheets of vinyl play pieces inside. At first I was like, Oh cool! Sound effects and bad guys! But then I looked closer and I was like, Wait... is... is that... is that K.I.T.T.?! 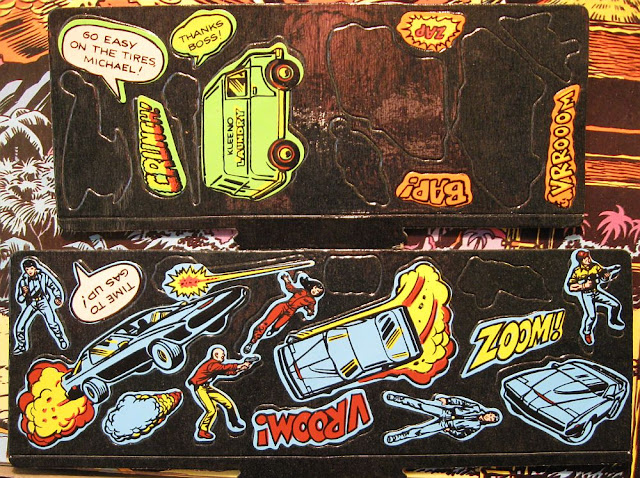 Heck yeah it was K.I.T.T! A few of them actually, with a couple of little Michael Knights as well. Somehow, the seller (or the original owner ages ago) must have accidentally stuck these sheets from a Knight Rider set into the G.I. Joe set. Which is a bonus for me, because now I get to make such exciting scenes as this one... 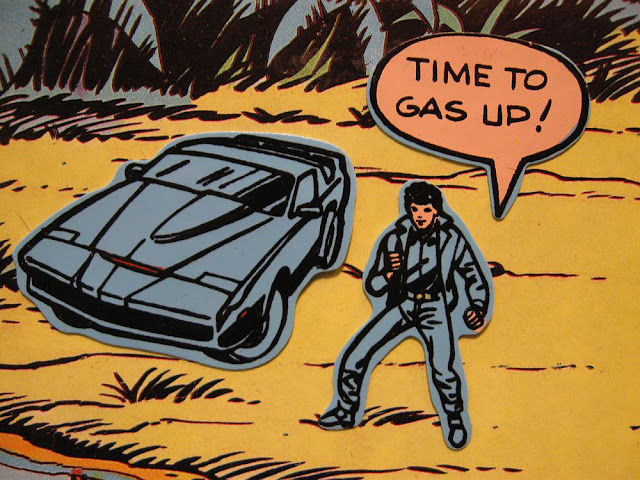 Anyway, the nostalgia bomb hit pretty hard on this one when I opened it up that started playing with it. I began to build a little scene, jam-packed with over-the-top para-military action, with Scarlett almost being bitten by a snake, and a dude climbing a rope, and Zap getting some medical supplies, and Breaker doing something up in the hut tower, and a monkey, and some dudes flying with jet packs, and Stalker jumping up in the air with an American flag, going "Heck yeah, America!" 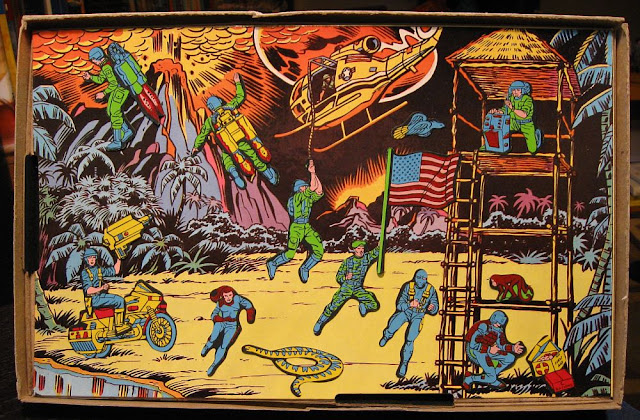 And then it hit me... I had made this very same scene almost 30 years ago.