When last we left my action figures, Captain America was still trying to get Boba Fett to let him ride his new Schwinn Stingray...

"Come on! Just a quick spin! Like, I'll just go around the block then bring it right back." 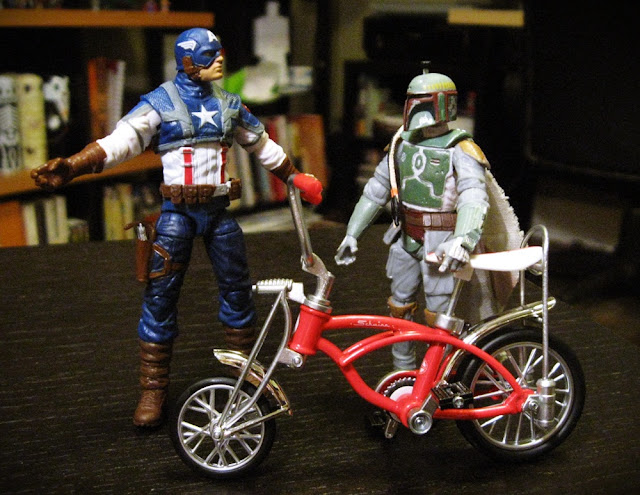 That's when they heard an approaching rumble. The guttural chug of a diesel engine and the crackle and roll of massive wheels... 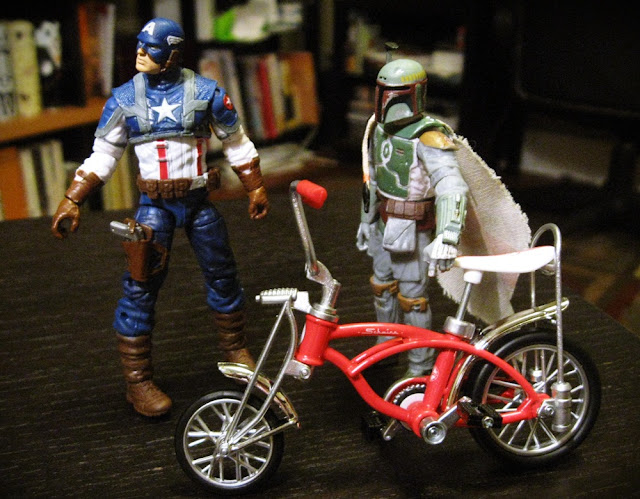 What approached was a gleaming machine of pure beauty. Part transportation, part home away from home. A vehicle designed to eat up the countless miles and rest its massive frame in campgrounds all across the country... 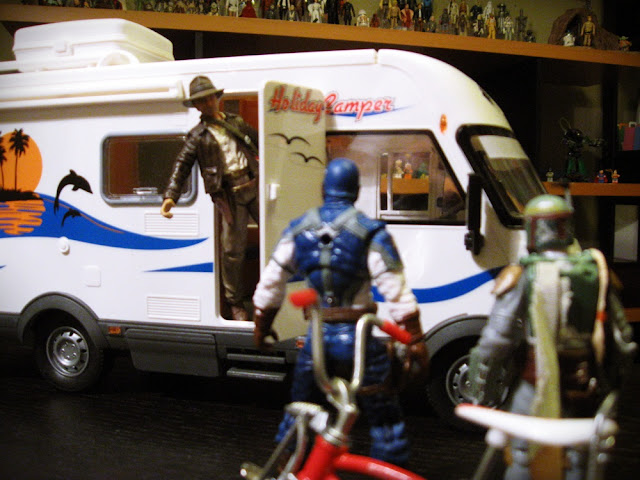 Indy surveyed his new house-on-wheels like a curator appreciating a newly acquired Renaissance painting. "Yeah," he said, grinning from ear to ear, "I've been threatening to get one of these for years. Think of all the archeological digs I can take her on!" 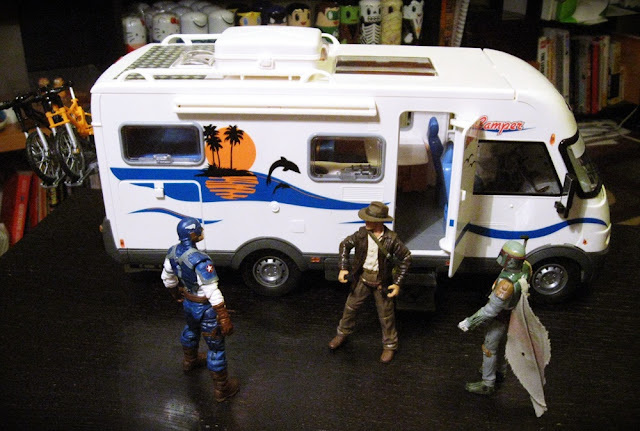 "This baby's got everything!" Indy bragged. "Windows that open..." 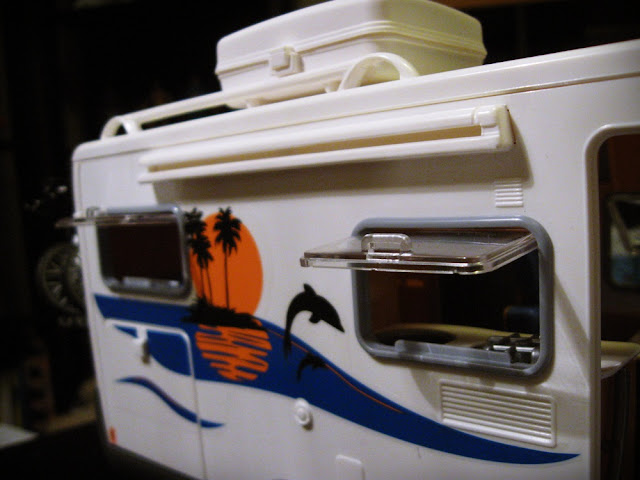 "Tons of storage and a drop-down set of steps..." 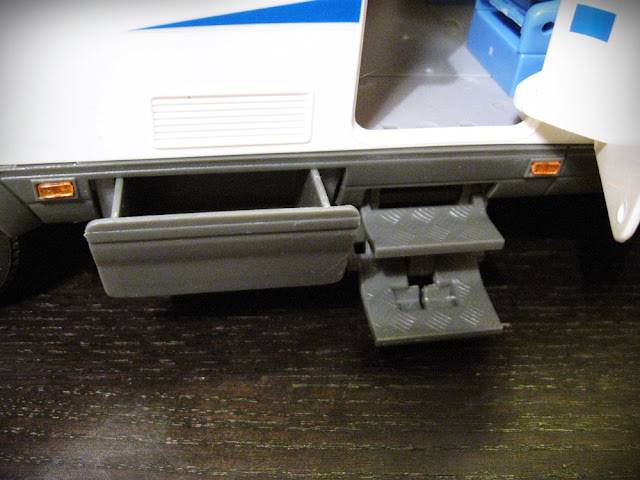 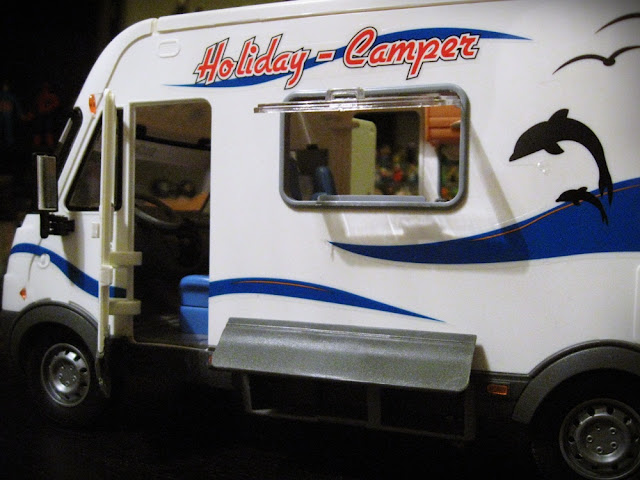 "And dig this; it even came with a couple of sweet new mountain bikes!"

"Nice! Can I ride one?" asked Cap, not wasting any time. 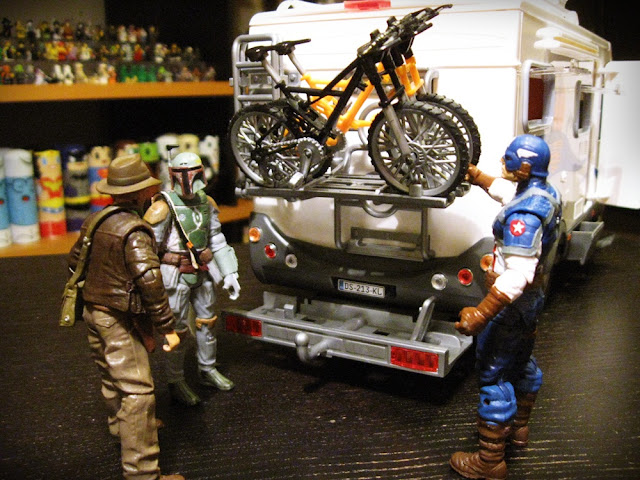 "Check it, " Indy continued, "It's even got a drop down ladder for roof access." 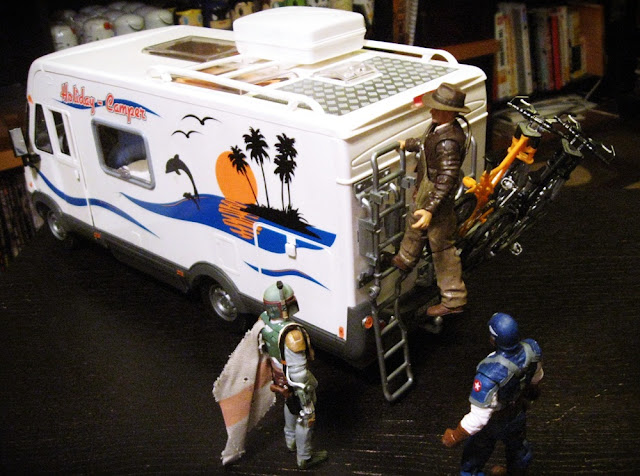 "Let me show you the inside," Indy said, eyes twinkling with excitement. "It's got a cushy cab up front, complete with cruise control, MP3 player and a glove compartment. It's literally a compartment specifically for my gloves!"

It started to dawn on Cap and Boba at this point that Indy may be a little too excited. 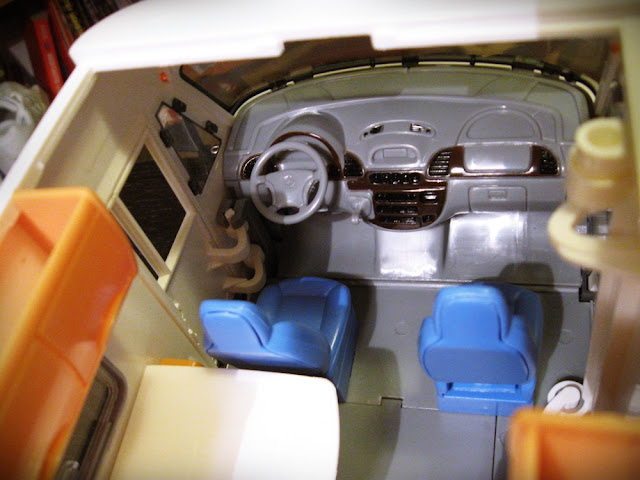 "It's got a nice little dinette area for playing cards or eating chili dogs or dusting off a 13th century Mayan artifact..." 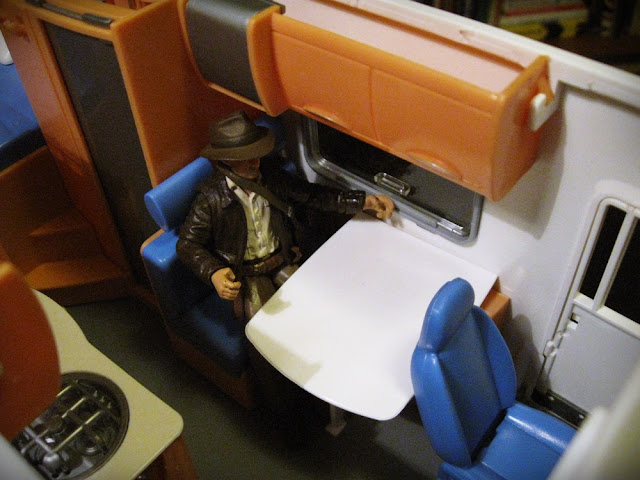 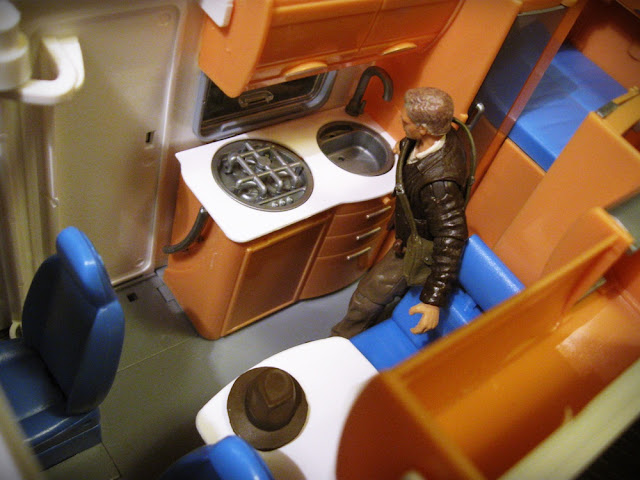 "A full bathroom with a sink, a shower and a toilet, so you don't have to bathe in a freezing lake or poop in the woods..." 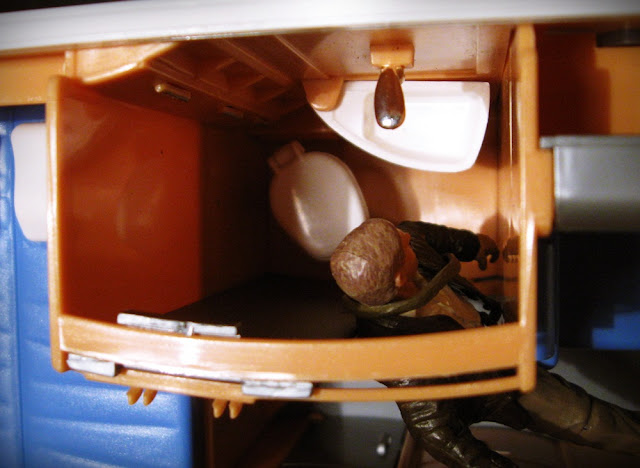 "And of course... this is where the magic happens!" Indy bragged, stretching out on the queen size bed in the back.

Cap and Boba gave each other a look, as if to say "Yeah, right," but it was lost on Indy, blinded as he was by his new toy. 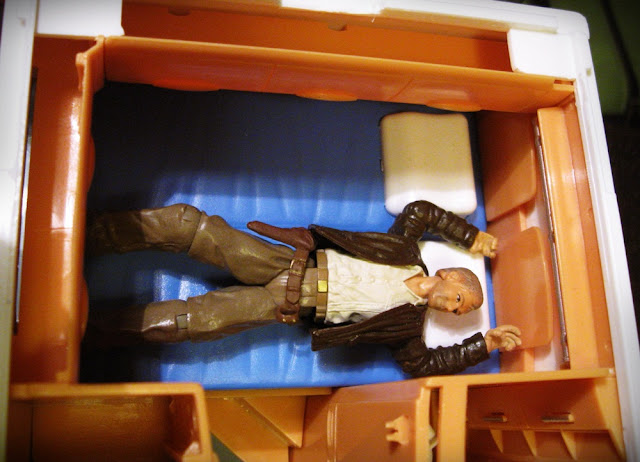 "So, what do you guys say? I'm thinking it's time for a good old fashion camping trip!" said Indy, desparately trying to get his buddies on board.

"Well," said Cap, "It would be pretty fun. I could bring some gear and our sleeping bags."

"Yeah!" agreed Fett, getting more and more excited about the idea, "I've got a tent that me and the Mrs. can sleep in." 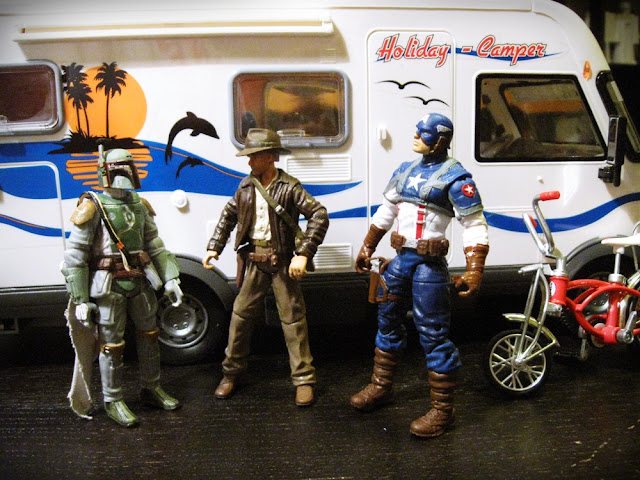 And speaking of wives, as if summoned from thin air, the significant others of our trio of best friends (and BFFs themselves) walked up to see what their husbands were scheming.

"Okay, boys, you all look like you're planning something that we're all going to regret," said Scarlett. Spider Woman and Princess Leia gave each other a knowing look.

"Well, "said Captain America, "Indy here got this new RV and we were thinking that it would be a blast to all go camping." A hopeful look spread over his face. His wife, Leia, didn't look convinced. She was a princess after all.

"Actually, Spider Woman said, "My husband has been wanting to do this for years, so I have to support him. I'm in." She looked at her friends. "Oh come on! It'll be fun! We can watch our husbands act like cavemen all weekend."

The girls finally agreed and a weekend was picked for their camping trip. 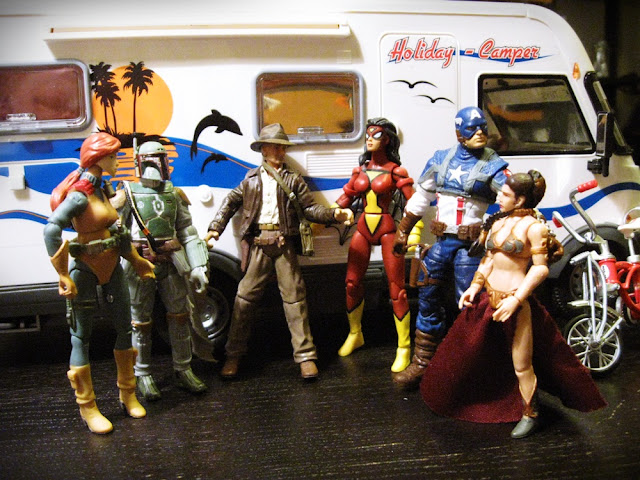 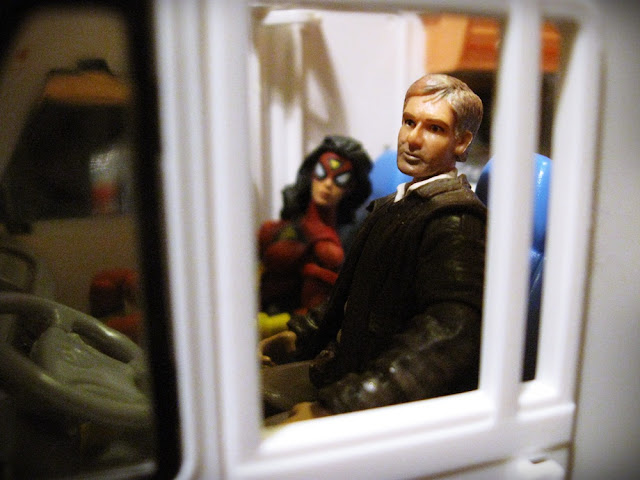 As Indy and Spider Woman drove away, Dr. Jones could barely contain his excitement.

"This is going to be great! Just imagine all of the ancient artifacts we could dig up!"

"Honey..." Spider Woman said, getting that put-her-foot-down look on her face, "This is meant to be a fun, relaxing trip with our friends. So no digging."

"But what if I find something? Like an ancient Indian artifact?" he said, looking for some leeway.

"No." said his wife, with a healthy dose of finality.

"But it'll belong in a museum!" he said.