Big Announcement: A New Job for the Lord of the Dork Horde!

Well, this has been a crazy few years for me. I went from being a broke art school student (back in the Geek Orthodox days), to a full-time t-shirt designer (When I started Hey! Look at My Toys!), to an art director for a start-up collectibles company, which allowed me to attend San Diego Comic Con twice, and now it looks like I'm taking another big step.

As of this posting (Monday, Aug. 20th, 2012) I will be starting my first day as the newest designer for Funko Toys! 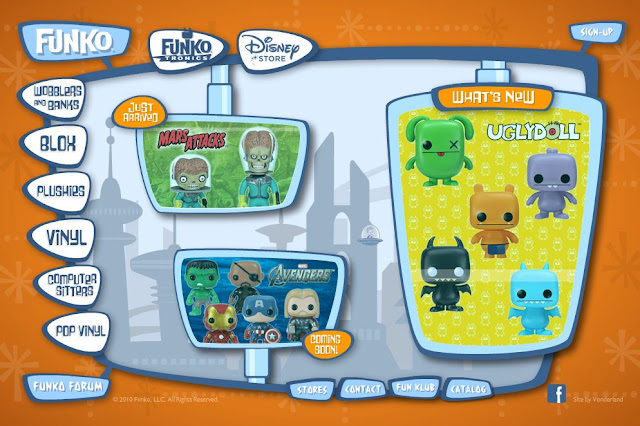 You probably know them best for there vast array of Wacky Wobbler bobble-heads, vinyl Pop! figures and much more.

Well, in a deal that went down a couple of weeks ago, in short, Funko bought out Mixo and I basically came along with the deal.

So now I'll be commuting to the Funko offices every morning (no more all-day chillin' in the Nerdatorium for me) and heading up their new papercraft and tin collectibles lines, and chipping in on other design duties for their other lines as needed.

It goes without saying that I am mega-ultra-super-excited-times-a-gazillion about this. I have always loved Funko's products (I'm in love with their Vinyl Invaders series) so it's pretty much a dream come true to be working for them.

I will miss Mixo more than I can say. I was there from the very first day me and my buddy Mike thought of making tin can characters and filling them with ground coffee (ha!), all the way up to our stellar reception at this year's SDCC. Now it's time to take those ideas to a much bigger scale.

So, in case you're wondering, the Kookycans, Kookycraft 9" papercrat figures and Boxos 4" papercraft figures will still be coming out, but they will all say Funko on the packages now and will probably be somewhat redesigned to fit the Funko look. I know that we're already talking about turning the tins into even more figural pieces (with arms and legs and whatnot). But time will tell on how all of this plays out.

However, all that having been said, I'd like to assure readers of my blog and fellow Dork Horde members that this in no way means that my blog is going away! Don't worry, I'm not going to pull another Geek Orthodox. ;)

No, the Lair is forever! And I still have major plans for the Horde as a group and can't wait to take things further.

But while I'm getting used to the new gig, posting may be a little sparse here. But I promise I'll try not to have too much fun designing all those DC, Marvel, Star Wars and other toys and get back to a regular blogging schedule soon.

Thanks, gang! Wish me luck on my first day!
Posted by Reis O'Brien at 5:00 AM