This week's topic: Who would you take in an 80′s character fantasy draft? Your team’s goal will be to defeat a shady conglomerate of Russian businessmen and their team of hired ninjas. It’s go time.

If there's one thing I can't stand, it's a ninja attack. Luckily, if ninjas ever tried to attack the Nerdatorium, they'd be in for a world of hurt, because this joint is packed to the gills with badasses and widow-makers. In fact, all I'd have to do is look over at my action figure shelf and say, "Get 'em, boys," and those masked shuriken-slingers would be swarmed by my own army of giant robots, Sith Lords, Dark Knights and real American heroes.

But if I had to designate a special squad of ass-kickers and name-takers, all from the 80s, and all from my current collection of posable plastic pugilists, I think I've got just the crew.

Ladies and gents, I present to you, The Badass Anti-Ninja Squad... 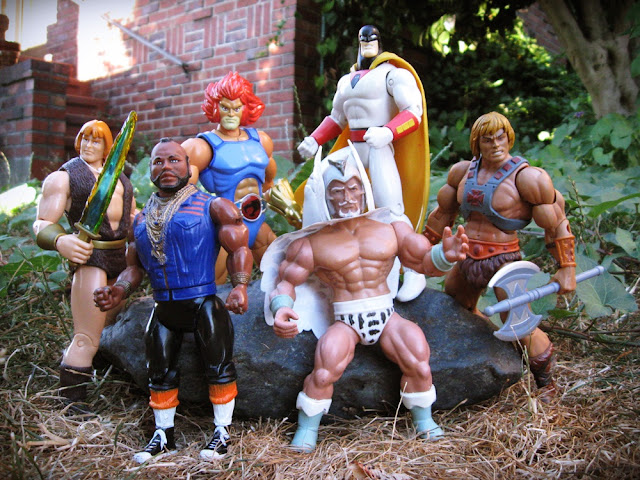 We've got a whole lot of pain-bringers in this group. And that's what you need in a ninja attack. Head-crackers, limb-loppers and madmen.

Pictured above, we have Thundarr the Barbarian, Mr. T, Lion-O, the Warlord, Space Ghost and the Master of the Universe himself, He-man. And before you start bitchin' about Space Ghost being from the '60s, he came to my attention via reruns in the early '80s, and besides, the rest of the squad voted him in. So like it or lump in, ninja-lover.

Now, bring on those pajama-wearing pansies. We got a dozen fists to feed to 'em.

Memories of Toymorrow is fighting fire with fire.