This week's topic: At what point did a pop culture series “jump the shark” and lose your interest.

Boy howdy, have I missed getting in on some hot League action during my Halloween break. But I'm back and ready to get down to some serious blogging.

This week's topic dredged up all kinds of little, jagged-edged slivers of disappointment from over the years, from Mork & Mindy having an old Jonathon Winters for a baby to Laverne & Shirley moving to California.

But no TV disappointment (and I know that this didn't have to be specifically about TV, but let's face it, TV comes with a lot of disappointments) could possibly compare to one of my all-time favorite TV shows replacing their two main characters with two cut-rate knock-off wannabe scabs. 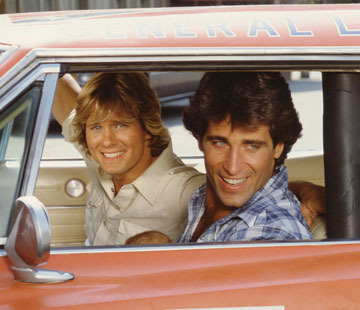 It's been no secret that I've been a die-hard Dukes of Hazzard fan since the premier episode hit when I was in 2nd grade. I fell instantly in love with Daisy, replaced the 1966 Batmobile in my heart for the number one coolest car on the planet with the General Lee and warmly embrace two down-home cousins, Bo and Luke, as my new paragons of heroism, perhaps second only to Luke Skywalker and Han Solo.

And for 4 seasons, I religiously watched the adventures of the Duke boys unleash every Friday night, and there was much rejoicing.

And it was during the summer of '82 that I first heard the grumblings that something nefarious was afoot in Hazzard county. It was my older brother that broke the news to me about the looming replacement of Bo and Luke on my favorite TV show. Of course, not wanting to believe such a travesty could occur in a just world looked over my a loving God, I doubted him. But soon I would see a picture of these sad wannabe doppelgangers in an issue of TV Guide and know that my favorite show ever would be forever changed.

To be fair, I gave the show a chance for two or three episodes before finally walking away in disgust. It just wasn't the same, and Hollywood had handed me a stale Saltine cracker when I had had Chicken-in-a-Biscuits with melted cheese on top for the past 4 years.

Even when Bo & Luke came back, the damage had been done. My taste for the Dukes of Hazzard had soured and I had moved on.

So, thanks a lot, Hollywood. Now I have to go watch Facts of Life. Oh wait, they aren't in an all-girls school anymore. Now they're all fat and own a gift shop. Crap.

From other league members:

Shezcrafti is not impressed with aliens.
Dan & Pauline want to believe, but can't.
Iok is done with Paranormal In-activity.