This week's topic: “What if…? — Write an alternate turn of events for a pop culture storyline.”
Oh man, i loved "What if...?" stories from marvel comics and have always  had this odd habit of thinking of alternate posibilities if just one simple factor is changed.


Often, in movies especially, the entire story (if not an entire trilogy) depends on one single choice by one character or a simple stroke of luck usually played out in the first few minutes of the flick.


And there is no movie that I have run the alternate reality numbers on more than the original Star Wars. 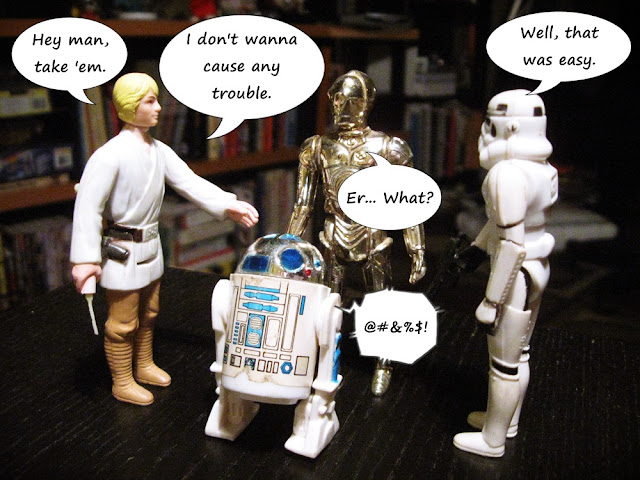 Sooooooooooooooo much of that movie, and the two following sequels could have been permanently altered by the tiniest of changes.


Here's a few that have kept me up at night in the past...


What if Luke had just handed the droids over? BAM! End of movie. Artoo and Threepio get their memories wiped. Leia gets executed and Luke goes into Tashi Station to pick up some power converters.


What if that dude on the Star Destroyer just blew up the escape pod anyway? You know, just to be safe? What, was there a laser shortage?


What if Greedo had just walked into the cantina and busted a cap in Han. No conversation. Well, first off, Chewie would have pulled his head off, but then who would Luke and Ben end up with? That greaser looking dude in the astronaut's gear?


What if Ben wasn't such a quitter and just whooped Vader's ass like he did back on Volcano Planet? BAM! End of movie. Ben gets on the Falcon and is all like, "That's how it's done, bitches."

And finally, what if Han didn't come back? What if he just went back to Mos Eisley, paid off Jabba and then got busy with those two chicks with the black ropes for hair? Vader would have blasted Luke's X-Wing out of the trench and then Yavin would have been blown to bits. BAM! End of movie.

Goodwill Hunting for Geeks is rooting for the Gremlins.
The Man Who Stares At Toys gives Alien an alternate reality.
Memories of Toymorrow thinks that Cobra Commander should be more thrifty.
Posted by Reis O'Brien at 5:00 AM