This week's topic: Take me out to the ball game! America’s past time has been prominently featured  in pop culture for over a century, so this week, we’re talking baseball!

This week's theme is pretty loosey-goosey and really gives us some room to play around. This is a good thing in my case because I was never the most athletic kid, and never a huge sports fan (although I have recently discovered a love for NFL football. GO BEARS!).


However, like any other red-blooded American kid, the great American past-time did manage to seep into my life in small ways. For example, I did play Little League baseball for a few years in grade school. I was on the worst team in the entire league. We were literally in last place every single year. We were like the Bad News Bears except we never got better. Of course, we were sponsored by a men's shoe store and although we were technically the Tigers, all the other kids called us the Loafers. Still, despite all of that, I do have fond memories of those hot summer afternoons at the ballpark, eating popcicles after the game and generally trying to look cool in our uniforms. And even though I was never a major sports nut, I do honestly feel that your childhood is missing something if you never road your bike home, covered in dust from a 3rd base slide, with your old leather mitt hanging from your handlebars.


Baseball also showed up in my life in the form of games and collectibles (of course), and those tend to be stronger memories for me, so I figured I'd ramble a bit about those.


My earliest baseball memory comes in the form a massively contagious fever that swept through my small hometown the summer after 2nd grade, when our local Tastee Freeze started carrying a line of collectible Major League Baseball mini helmets that acted as cups for your ice cream sundaes. 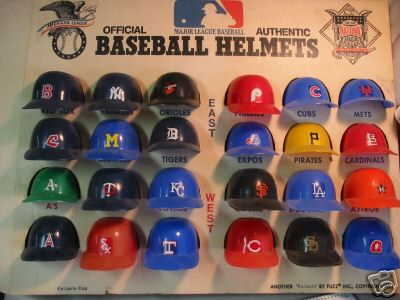 Every kid I knew went gaga over collecting all of them, even though I didn't know a single kid who completed a set. If I remember correctly, the most elusive helmet was the Phillies. This was during the heyday of Pete Rose, so everyone wanted one. Quite frankly all I wanted was my beloved Detroit Tigers helmet (growing up in Michigan and all), and it probably took me 8 trips to Tastee Freeze to finally get one. Oh, darn.

It did my heart good to see that Baskin Robbins has revived the collectible helmet/cups, even though I hardly recognized some of the newer teams. 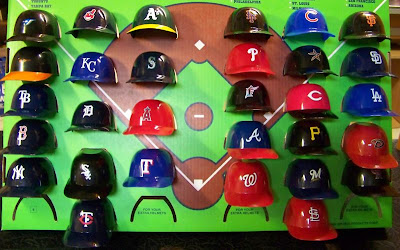 Baseball also made its mark on me in the form a of hand-held LCD game from Mattel that my brother got for Christmas one year (he being the total jock of the family). My brother is 9 years older than me so I tended to get a lot of his hand-me-down stuff eventually and this game was no exception. 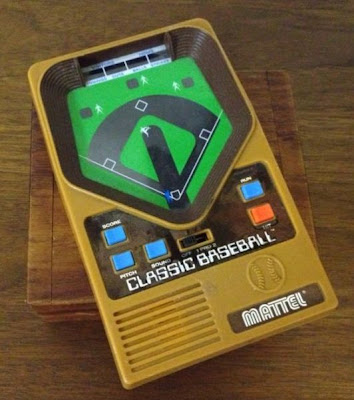 I would spend hours playing this game, getting caught up in the flashing red lights and trying my best to digitally knock a ball over the fence. By today's standards, this game might as well be a rock with a stick tied to it, but back in the late '70s it was loved by me and several of my friends.


Speaking of friends and digital baseball games, I do remember a kid in my neighborhood having a slightly different version and I was shocked to find one on eBay... 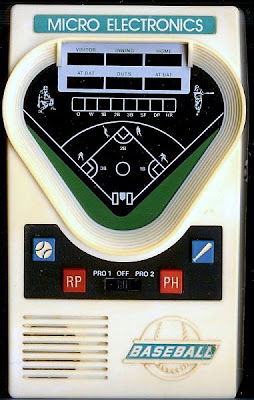 And finally, I have to drag my big brother back into this article to talk about my last example of baseball memories, which came in the form of an Intellivision cartridge way back in 1984. My brother bought an Intellivision set that year and it quickly became our favorite past-time, especially since it was our first game console (no, I never had an Atari, much to my dismay). 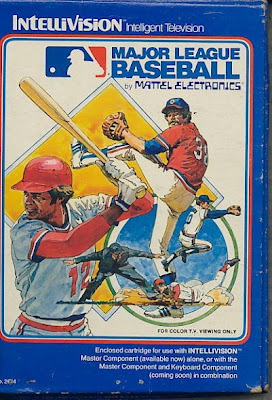 One of the games I remember playing most, of course, was baseball. Again, these games look positively prehistoric these days, but we were blown away by the interactivity they contained back in '84. I remember spending hours inside the house playing this game with my brother, which was fine with this sensitive little artist kid, since it meant that I got to stay inside and not risk getting hit in the face with an actual ball (a big fear of mine back then). 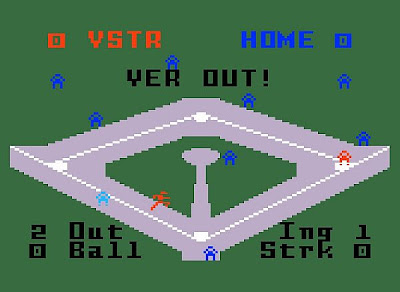 So, despite my efforts to avoid sports in exchange for the wonderful worlds of fantasy and science fiction, it seemed almost impossible to be a kid in America without baseball having some sort of effect on you.

Even those games of Whiffle Ball held in our backyard, with the bees buzzing by and the bases made of whatever you can find; a trashcan lid, an errant roof shingle, an old pizza box, are held in a place of high regard in my heart. For a kid that claimed to hate sports, I did spend a lot of afternoons bat in hand, wad of Big League Chew in my cheek, ready to take a swing.


And even today, I occasionally stumble onto a game being aired on TV and think back to those afternoons where the sound of a game would waft from the TV set throughout my house, and I can still smell the grass of the outfield of my Little League ballpark, and every now and then I catch myself in a store gazing at the packs of Topps baseball cards fighting the urge to pick up a couple, just to smell the gum and cardboard one last time.


But then I imagine a ball hitting me in the face, and I decide to just go back inside and draw.