League of Extraordinary Bloggers Weekly Theme: When I was 12...

This week's topic: Grab Rufus and head to the phone booth, because this week, we’re going back in time! Dial up the year you turned 12, and revisit the last official year of your “childhood.”

Good grief. As soon as I read this week's topic description, I knew this was going to be a tough one for me.

You see, the 12th year of my life, from December 1984 to December 1985 has somehow managed to stand out in my memory as the most bittersweet year of my life. It had its ups, it had its downs. And unfortunately, when I look back on that year and do the math, it all adds up to a pretty unhappy year for me. I mostly remember it as a series of sad images of a boy being plucked from his home, taken away from his longtime childhood friends and set down in a horrible new place filled with terrible people where he would spend the next 17 years of his life feeling like a stranger in a strange land. Combine that with the fact that I was one of those kids who desperately fought against growing up, and suffering the slings and arrows of ridicule that such childish stubbornness brings with it, being 12 years old was very much, to me anyway, like living in a meat grinder, going in whole and coming out mangled.

However, not to be a total Debbie Downer about the whole thing, I decided to find something that I could focus on that brought nothing but happy memories from that year. I admit, it was tricky, but I did manage to find something. I thought back on a particular item that practically changed me for the rest of my life. From the moment I received this item, I was forever different than I was before. This was an item that would travel with me, rarely leaving my side for the next 3 years. With this item, I was just a little bit cooler. I was mobile. I was fast. And I was able to peacefully glide over the world or grind down upon it in a glorious display of freedom and rebellion.

Because when I was 12 years old, I got my first skateboard.

What you see above is an almost exact replica of my beloved Valterra Dragon. (All of these beautiful pictures were shamelessly swiped from eBay.)

In June of 1985, having just moved to what I believed was the armpit of America, I was trying to get along as best I could as the new kid in a neighborhood full of mean-spirited redneck children. I made a few friends, and I would use that term loosely, but in moments of desperation, a 12 year old will hang out with whoever is available.

It was during one of these monotonous afternoons when I met a kid from the same apartment complex as I came upon him in the otherwise empty tennis court. He was all by himself and doing something which to my eyes seemed truly bizarre. He was riding a skateboard. But he was riding it like The Silver Surfer rode the celestial skies, crouching low in his graceful turns, skimming his hand over the tennis court surface, then kicking upward into a burst of speed.

I had never seen anything like it. Sure, I'd seen skateboards before, but they were these crappy little plastic things with junky wheels, often molded in yellow and looking for all the world like flattened bananas. They were no fun. But what this kid was riding was like something from space. It was massive, like a surfboard, and encrusted with protective coverings on the nose and tail. I would later learn that this was the now-legendary Nash Executioner, a skateboard worthy of a place is skateboarding history.

I mustered up the energy to talk to him and he not only turned out to be a pretty cool kid, but he even let me take his skateboard for a spin. I had no idea what I was doing, but it didn't take long to find my balance.

That night, I wasted no time begging my parents for a new skateboard. I had to go through the usual hullabaloo about saving my allowance or waiting until Christmas, and eventually went to bed dejected. But the next day, I was once again reminded as to why my mother was hands-down the greatest mother in all of recorded history when we made a small detour before our usual weekly grocery shopping trip into the nearby local K-mart, which we walked into, headed straight for the sports and outdoors section, where my mom smiled down at me and, gesturing at the array of skateboards on the shelves, told me to pick one out. 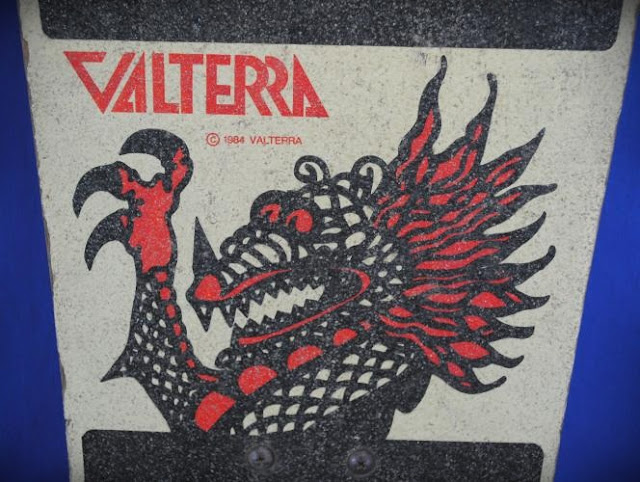 The problem with being a 12 year old is that it comes with a wide emotional range that can do 760 degree spins like Tony Hawk, which at that particular moment sent me from jubilation about getting a skateboard to dismay at not finding a Nash Executioner in about 7.5 seconds. Eventually, in that way that only moms can, she managed to navigate the dramatic waters of a pre-teen making a major decision until I finally picked one out. 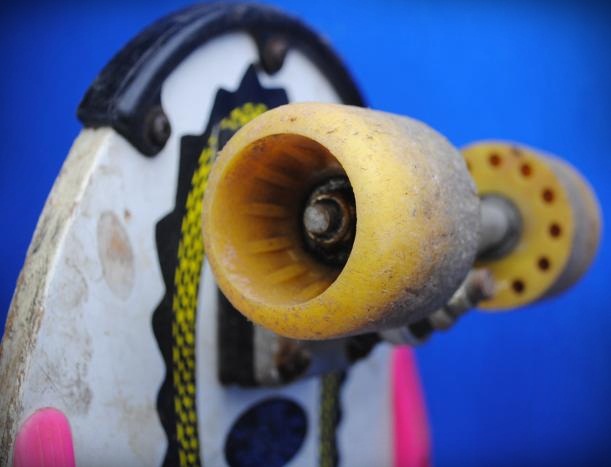 As you have already seen, I picked out the Valterra Draogn. I'd like to think that I picked it out due to its smooth bearings and high quality wheels.That I tested it out in the store and found the deck sturdy and the trucks strong yet pliable. But in reality, I picked it out because it had a dragon on it, just like the Nash Executioner. 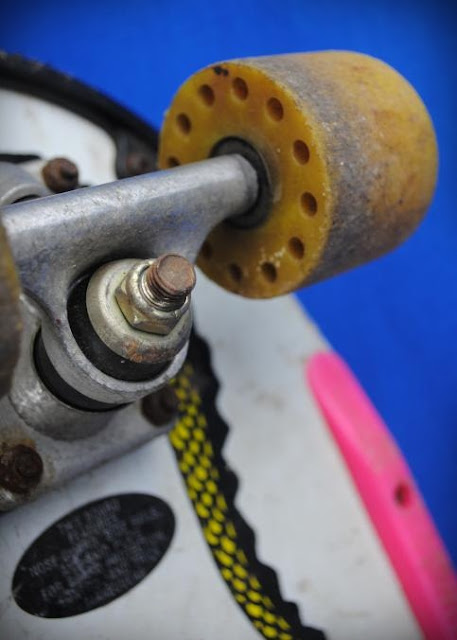 That afternoon, heading down to the tennis court (where no one ever played tennis, thus making it our makeshift skate park), I would kick off what would come to be a life-long love for skateboarding. My new friend (who would sadly move away before the school year began, I told you my 12th year sucked) and I would skate every day that summer from early morning until well into the evening. Eventually, as the summer progressed, other kids in the neighborhood would also get skateboards and join in. Before long, we had a regular skateboard gang and skating would take over all of our waking hours, practicing new tricks and poring through the multitude of skate magazines that were just starting to show up in our local 7-11 news stands. 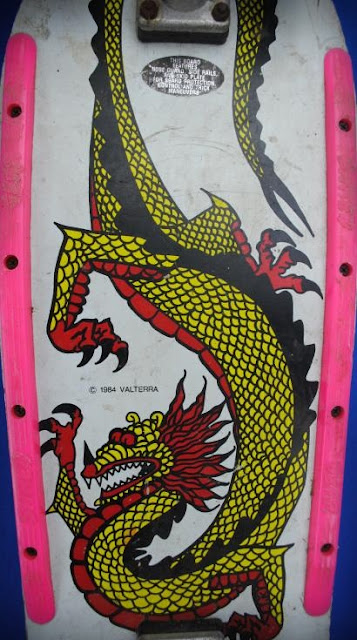 By the time the next summer had rolled around, I was uprooted once again and had to start all over in a new neighborhood and a new school. The upside was that just about every single kid in my new school skated, the downside was that we moved to a small blue-collar section within a school district packed with rich kids, which had the wonderful side effect of me instantly getting made fun of by the brand-minded kids for having a Valterra skateboard instead of an expensive Tony Hawk or Powell Peralta deck with brand new Slime Ball wheels.

This caused a brief period during my skating days when, out of the kind of skin-flaying embarrassment only a 13 year old can feel, I tried my best to hide my deck's lowly brand name with lots of stickers and new wheels. It worked a bit, but nothing worked better than making friends with a kid who had an even crappier no-name deck than me and then the both of us skating circles around those rich punks, thus laying down the new law that it doesn't matter what you ride, but how you ride it. 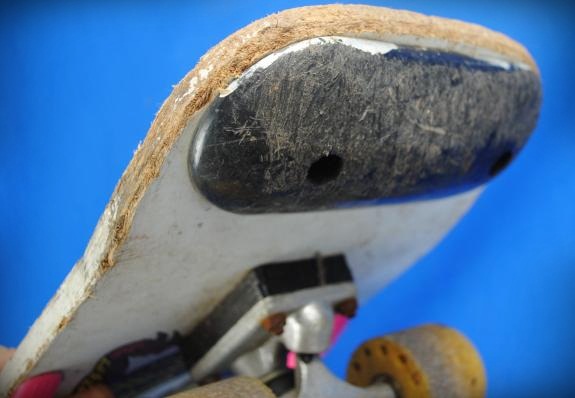 Eventually, when I was 15, and had earned my own money from my first job, my Valterra Dragon would be replaced by a Metallica Zorlac deck which I rode until I was 18.

It's odd to think that something as simple as a plank of wood and a set of wheels could change one's life so drastically, and how so much of your emotional development, courage and social status hinged on such a seemingly frivolous plaything. But then again, I came out of my childhood and into teendom at exactly the perfect time to be majorly influenced by the booming skateboard craze.

Yes, there were shameful times when I was embarrassed by my Valterra Dragon, but those were fleeting moments all too common in the lives of pre-teens. For the most part, whenever I think of that skateboard, my mind is immediately flushed with images of me constantly working on kick flips, or cruising like a low-flying bird, crouched low over the passing concrete. Or just sitting on my board, with my friends sitting on theirs, outside of the Circle K, drinking bright blue Slushies after a hot long day of jumping curbs and rail sliding on bus stop benches. Or the countless scraped knees or bolting on a new set of Rib Bones.

Like everything I used to own, my original Valterra Dragon is long gone, but thanks to eBay, I never let that stop me from reliving a great memory... 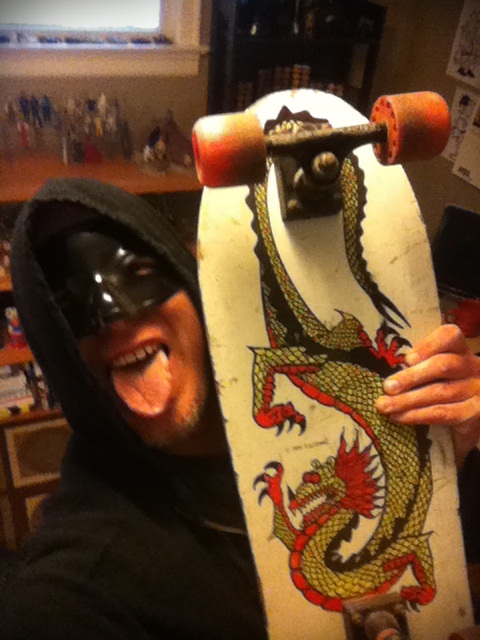 No, it's not the original that I owned. But yes, I have ridden it. These days I tend to prefer my longboard, but every now and then I do pick up this beauty and take it around the park by my house a couple of times. And if I really concentrate, and kick like there's no tomorrow, I can feel the familiar thrum of the passing asphalt under my vintage wheels and hear the creak of the ancient trucks and for just a second or two, I feel like I'm 12 years old again. And not the 12 year old who hated his new town or missed his old friends back in Michigan or felt the aching realization that his toy-playing days were ending, but the 12 year old who found a small slice of freedom on an empty tennis court on a pivotal hot summer day.

And then the kids at the skate park see me, a 39 year old aging thrasher from the old days go by, and they totally give me smack about my crappy board.