This week's topic: We all collect something. What is a holy grail item you hope to find at a flea market, toy show, or comic convention?


One would think that after all these years of hunting and collecting, and my (sometimes) single-minded focus of finding every single toy I had as a kid, that I would finally have reached that collector's nirvana where everything you have ever wanted was displayed before you, gleaming in its near-mintedness and filling your shelves with the comforting radiant glow of nostalgia.


But you'd be wrong!


There are still a few white whales out there for me, and with every fruitless flea market search, with every outbid eBay auction, the desire for these items becomes more and more like a burning sickness.

Don't me wrong, I've been very fortunate as a collector and have scored several of my Holy Grails, such as my Blue Snaggletooth (thanks to Eric Stettmeier!) , my Mego Conan the Barbarian (thanks to my good friend, Greg!) and my Shogun Warriors Raydeen (thanks to an eBay seller who didn't know what it was and just listed it as big toy robot). But this post is about the ones that got away.


Thinking on these elusive collectibles, I had to set a few rules for myself when writing this post. First, I'm only going to talk about items that I actually had as a kid. I mean, I would love a rocket-firing Boba Fett from 1979, but I never had one, so I'm not including it here. Also, I'm only going to talk about those items that are truly Holy Grails to me because they are either extraordinarily hard to find, or some jaw-droppingly expensive that my wife would make me sleep in the guest bedroom for spending that much on a toy. Sure, there are tons of toys that I had as a kid that I still haven't gotten around to getting again (Stomper 4X4s, Evil Knievel motorcycle, some vintage Smurf figures), but that's mostly because they are just a little too pricey for me but still plentiful and not out of the realm of possibility of finding for a decent price.


So this list is about the biggies. The uber-expensive. The ultra-rare. These are My Big 5.

5. Shogun Warrior Godzilla -  Every single kid in my hometown seemed to have had one of these. I had two, as a matter of fact. One I got out of a garbage can (missing his fist and flame tongue) and one I bought at a garage sale for $2 (complete). The sheer terror that this mighty beast instilled into the hearts of my hapless action figures is still felt to this day. Sadly, he went along with all of my toys in The Great Forced Purge of '87. Now he goes for hundreds of dollars on eBay, but I'm still keeping my eyes peeled for one that's a little less harsh on my wallet. 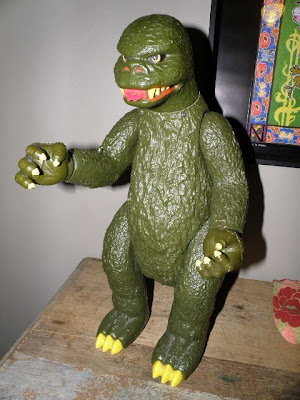 4. Blue Mustang State Police Car - Now, I know what you're thinking, Why the hell is this no-name Woolworth reject on his list? Well, I'll tell you. This car may have started out as a one-off mom-can-I-get-this toy purchase, but it quickly became one of the most played with toys in my toybox. There was just something about the sheer aesthetics of this car that made me fall in love with it. When it wasn't chasing my Mego Dukes of Hazzard General Lee around, it was often being turned over and over in my hands, being admired for it's simple beauty. Turns out that I wasn't the only kid who loved this toy car, because every time one pops up on eBay, I get soundly outbid every time. But one day... 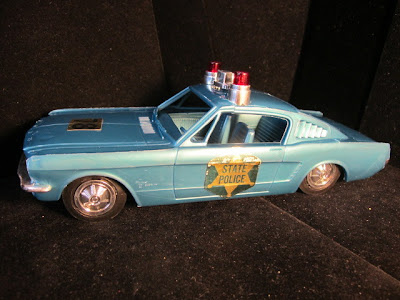 3. Transformers Shockwave - I only ever owned one Transformer and it was this violet badass right here. Finding a complete one for under $150 is about as hopeless as a dream can get. 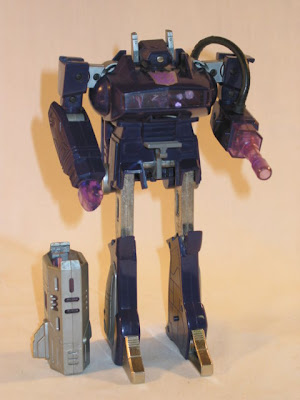 2. Weebles Haunted House - This, ladies and gents, is the very first toy I ever remember opening at Christmas. I must have been 3 years old. And this toy has it all for me. It's kind of spooky, yet kind of cute. And although the parts would get lost over the years, the house itself (along with my Fisher Price Sesame Street playset) would act as a main headquarters for my action figures for years. But most of all, opening this on Christmas morning (or it may have actually have been Christmas Eve) in 1975 and playing with it on the floor of our living room with my mom is the very earliest memory I have of my mom and I playing together, a memory that I hope to god I never lose. 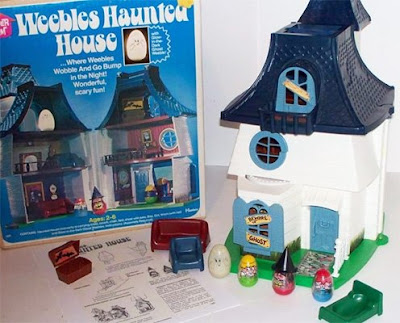 1. Nerfman - And the number one Holy Grail toy of all time for me is the legendary Nerfman, the squishy superhero that you could throw through the house! Oddly enough, my burning desire to find another one of these isn't so much built upon tons of fond memories of playing with him (although I did have a blast with this toy), but more upon how shockingly hard to find he is now (a few show up on eBay each year, but go for hundreds of dollars). Also, for some reason, Nerfman represents to me ground zero of my childhood. I got him for Christmas when I was 6, when the unfettered joy of being a kid was truly kicking into gear for me. Nerfman serves as a marker for me, at the very moment that I became aware of how awesome it was to be a kid. So, it's not like I have some strong emotional attachment to him, or some especially great memory connected to him, but as a bookmark in time, as a beacon on the shores of my childhood, that get farther away from me with each passing year, Nerfman is a must. Not so much as a collectible, but as a time machine. 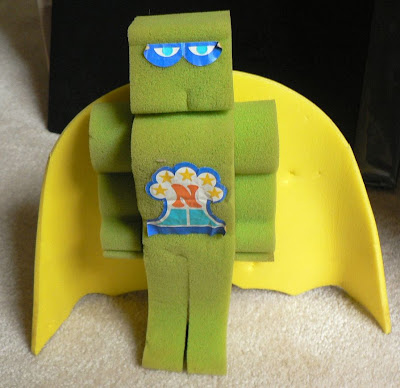