What kid growing up in the '80s didn't collect trading cards? Even if you weren't an avid collector, you still ended up with a few packs worth of cards every now and then. In my school and neighborhood, trading cards were practically legal tender in our kid world. If one kid had a pack of Pop Tarts, you could get one of those Pop Tarts from him for 4 Superman cards. I once managed to get a whole shoebox of Return of the Jedi figures in exchange for a healthy stack of baseball cards. And we even once coaxed another kid into eating an earthworm for a Mean Joe Green card. I know, we were horrible.

Anyway, I was a full-blown trading card addict as a kid, amassing several boxes full of cards based on movies, cartoons and (occasionally) sports. So I thought it would be fun to list my top 5 favorite trading cards series that I was pretty much always willing to drop some lawn-mowing money on.

Most of these aren't going to be shocking to any of you, but here they are nonetheless. 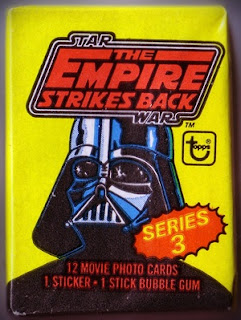 Now, most of you are probably wondering why I didn't list the Star Wars series of cards, and I did own a metric crap-ton of those, but it was the ESB cards that saw my most fevered bout of collecting mania, and also represented my very first foray into trying to collect every single card in the series, which I eventually managed to do. Also, the ESB cards were just gorgeous, with their frames designed to look like brushed metal and their legendary "letter" cards. 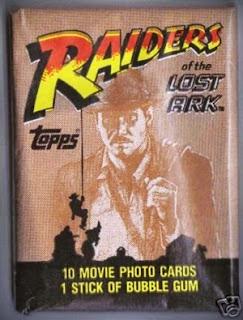 2. Raiders of the Lost Ark

This is another card series that I battled and won in my efforts to complete the series. Sadly, I think I was about the only kid in my neighborhood that was crazy about these cards, so I never really had anyone to trade with. So I was on my own, and I bet if I had kept track, I probably single-handedly bought the entire box of these wax packs down at Bailey's Pharmacy all from bottle and can return money. 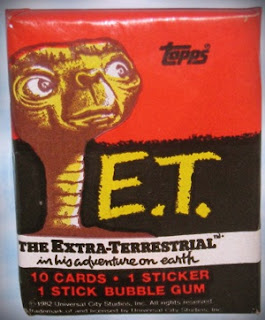 At the other end of the spectrum to the lack of interest in the Raiders cards in my neighborhood and school, pretty much every kid I knew was crazy for E.T. cards. One of the best things about these cards is that we often found those big, long packs of E.T. cards, where you got like 30 cards or something, which some math-minded kid in our school figured out made the cards cheaper if bought that way, and of course, helped you complete your collection faster. 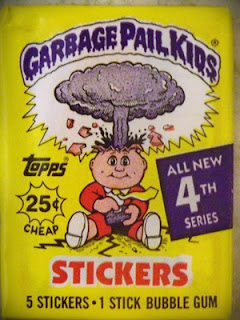 These cards represent the trading cards that I probably collected for the longest period of time. These were an absolute phenomenon in middle school and every kid I knew collected them. I remember being sneered at by the cooler kids in 7th grade while we nerds huddled around our 3-ring binders packed full of Garbage Pail Kids cards (technically stickers, but you only stuck your doubles on stuff, and only then if they weren't good trade fodder). I would collect these cards all through 7th, 8th and even into 9th grade. Later, in my 20s, I would start to hunt down the other cards I missed in my teen years and thanks to their resurgence, I even bought a few packs recently. My love for these cards will probably never end. 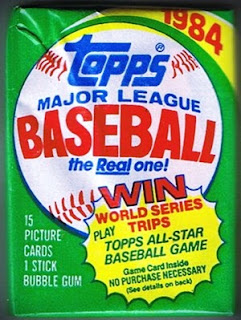 I know, I know, I wasn't exactly the biggest sports lover as a kid, but for some reason, especially through my Little League years, it seemed like an American rite of passage to collect baseball cards. Growing up in Michigan, me and my friends were often scrambling to be the first to collect every one of the Detroit Tigers team cards and that reached a fever pitch in '84 when the Tigers beat the Padres in the World Series.

The reason I specifically chose Topps brand baseball cards is because, for some reason, when we were kids, we all got it in our heads that only jerks and idiots collected Fleer. Don't ask me why. I have no idea where that came from.

Thanks for checking out my list. Another Top 5 will hit the blog next Friday! See you there
Posted by Reis O'Brien at 6:00 AM