This week's topic: What is something you absolutely hate or love or just don’t get, or maybe it’s something you have never even seen or read. What is your deepest, darkest geek confession?

For someone who once declared himself "The High Priest of Geek" on a former blog, and is now going around touting himself as "The Lord of Dorkness", there are a few embarrassingly glaring faux pas in my personal geek history that I have spent years trying to cover up, ignore or unsuccessfully rectify.

None of these following confessions are all that shocking. It's not like I've never seen Star Wars or once shot a card cheat in Reno or anything. But as a person who has tried to be a well-rounded geek, and one who has tried to ride the zeitgeist of popular geek opinion, there are just some things that I've hated and loved that may make others tsk-tsk. 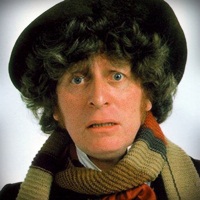 Confession #1 - I Can't Stand Doctor Who (and 98% of Star Trek).
I know that there has always been a Star Wars vs Star Trek rift in the geek community and I've always landed on the Star Wars side (despite the prequels), and up until the most recent Star Trek movie (which I loved to pieces), my stomach will turn at the slightest mention of anything Trek. But my distaste for Star Trek is but the tiniest of tummy aches compared to my unbridled loathing of anything Doctor Who.

I once stumbled onto an old episode as a kid, it was a rerun with the goofy scarf-wearing Doctor, and I immediately felt like I had just been inappropriately touched by a clown that smelled like cigars. And now we are in the midst of a massive Doctor Who revival, with a rapidly growing fan base rivaling us Trekkies and Jedis, and I can't help but feel like the zombies are at the door and we're fresh out of boards and nails.

Confession #2 - I Suuuuuuuuuuuck at Almost All Games.
It's true. Gaming in all of its forms has always been a major part of geekery. And as I grew up, gaming has gone from pinball, to Pong, to Pac Man, to Mario, to Doom, to Call of Duty, to Skyrim and I have been there the entire time sucking like no other gamer has ever sucked before.

Normally, this wouldn't bother me, but for one thing; in the geek world, being an awesome gamer gives you cred. To be able to say that you've finished all of Skyrim in two weeks, or that you've played every single NES Zelda cartridge and beat them, or that you've hit the Donkey Kong kill screen, makes other geeks develop instant nerd crushes on you. But sadly, I have spent my entire life never getting past the sixth screen on Pac Man, or getting killed in the first five seconds of Call of Duty, or even playing Skyrim for almost two months, only getting to level 12 and then just getting bored. Heck, I even suck at Dungeons & Dragons, which I still play every Tuesday night with my friends, because I can never remember the all the rules. I still go, "Wait, how do we level up again?" 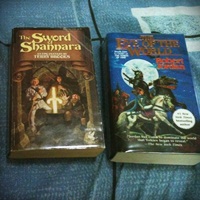 Confession #3: I Hate Fantasy Novels.
Well, let me clarify, I love fantasy novels as long as the aren't 1,000 pages of nothing happening and a gazillion volumes long. I gave that stupid Robert Jordan Wheel of Time crap 7 friggin books to get good and it never did, and each one of those puppies clocked in around 800 pages of super teeny tiny type. You know how many hours of my life I devoted to that garbage? Hours that I'll never get back?

Later, I would try 3 times to start the first Terry Brooks Shanharra novel and could never get to a hundred pages without being bored to tears. I also think that the idea of there being about 127 books in the series that I had to look forward to was just too daunting and I thought to myself, I can not make this kind of investment. So, guess who will not be reading the Game of Thrones books. Me.

Now, don't get me wrong, it's not about the authors. In fact, I loved Terry Brooks' first three Kingdom of Landover books, and the Robert Jordan Conan patiches are some of my absolute favorites. But my core aversion seems to be focused on a particular style of fantasy novel; those that crawl along at a snail's pace, are packed with around 112 main characters and 643 minor characters, all with names like Sh'kghrdyp L'wqxcgdb and other such nonsensical tripe.

Also, Douglas Adams is over-rated. Yeah. I said it. 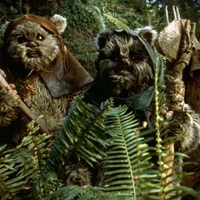 Confession #4: I Loved the Ewoks.
I know, I know. This is a crime against geekery second only to saying that Jar Jar Binks is the greatest Star Wars character ever. But let me explain.

When I was a kid, I possessed an unfortunate penchant for cuteness. I mean, I was your typical boy, all about monster trucks, werewolves and machine guns, but there was also a part of me that was drawn to anything cute, like koalas or whatnot. My dad would try to squash this out of me, but there was no use. I had a Smurf collection. I liked fuzzy stickers shaped like little panda bears. I slept with a cookie monster.

So when I got around to seeing Return of the Jedi, and we came to the scene in which Leia first meets Wicket, I was immediately enamored. The following scenes were a joy-filled mix of adorableness and adventure. They were short, furry, and had little teddy bear faces and I loved them. I would try to collect every single Ewok figure, beg for the Ewok Village playset (which I never got) and wear a Wicket t-shirt to school on a regular basis. This was the kind of thing that got me made fun of a lot.

Later on, I would hear about how we all actually missed out on having seen the entire final battle being fought on Chewbacca's home planet with Wookies filling the screen and the rumors of how Lucas changed them to Ewoks to cash in on potential merchandising, and I would also feel cheated, like many fans do. And as my penchant for cuteness came under control, I began to see past the fuzzy costume and Ewoks would eventually come to represent to me the ultimate in selling out.

But there's still a part of me that sees a movie still of Chief Chirpa or holds my Ewok figures in my hand and thinks, for just a split second, Jeeze, these guys are cute.