League of Extraordinary Bloggers Weekly Theme: Back to School!

This week's topic: Summer’s over, it’s time to go back to school! (Interpret it as you will.)


Brian is keeping it vague this week, which is fine by me as it gives me a much wider array of topics on which to focus. I thought long and hard about this one and had several ideas for what to write about, but I wanted to zero in on something specific. So, sit back and enjoy the tale of one school year when I went Return of the Jedi crazy.

Return of the Jedi was the big summer blockbuster in 1983, the year I would start 5th grade. Now, up until that point, I made jolly well sure that anyone who knew me for more than 7 minutes would walk away with a distinct understanding that I was a hardcore Star Wars fan, so it will surprise no one to know that I was pretty excited about the 3rd installment of the trilogy.

I spent that summer seeing the movie any chance I could get (managing 4 trips to the theater that year) and I bought up all of the trading cards, comic book adaptations and action figures that I could get my greedy little hands on.

By the time school started in September of '83, I entered my 5th grade year as a full-blown Return of the Jedi maniac. In fact, I went into the annual ritual of back-to-school shopping with a laser-focused determination to get as much Return of the Jedi merch as possible. And despite my mom's concerns that I was getting a little tunnel-visioned in my choices, I stayed strong and entered Blissfield Elementary as a walking advertisement for Lucasfilm. And I don't regret it to this day.

Let's take a look at some of the RotJ items I had on had that first day of school... 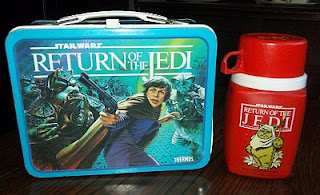 My Return of the Jedi lunch box. This would end up being the last lunch box that I would get for the rest of my school career. I would later learn that, starting in 6th grade, if you were uncool enough to bring your lunch in the first place, you better not add insult to injury by bringing it in anything besides a plain paper bag. 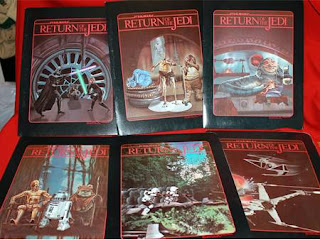 My Return of the Jedi folders. They never made a Star Wars license Trapper Keeper (why, I will never know), but that didn't mean you couldn't keep your homework assignments in a folder emblazoned with your favorite characters, right? 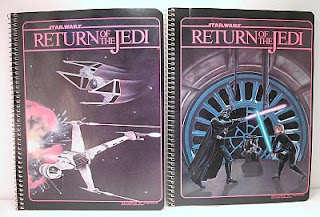 And if you're going to have RotJ folders, you'll need RotJ notebooks too. I probably did less class assignments in these than epic, sprawling drawings of space battles, but then again, I'm now a professional toy designer working on Star Wars licensed products, so all my teachers who told me I was wasting my time can suck it. 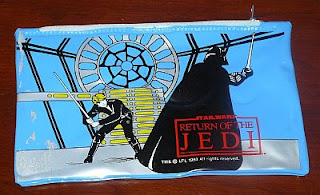 You just had to have a RotJ pencil case! I mean, where would you keep all of your... 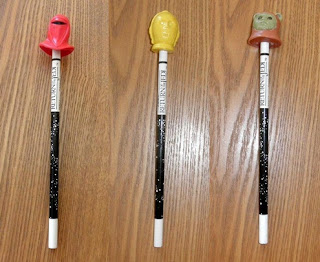 ... Return of the Jedi pencils? Actually, I don't really remember keeping anyting in my pencil case, but I remember having one. And the pencils shown here were never used. They were far to precious to grind up in a pencil sharpener or scuff up trying to erase something. 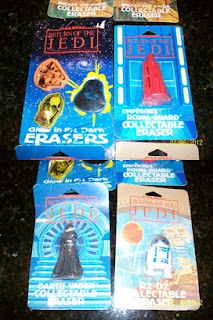 And speaking of erasing, I had a ton of Return of the Jedi erasers. Again, they never so much as grazed a single line of graphite, but the figural ones worked especially well as a stand-in action figure during recess. 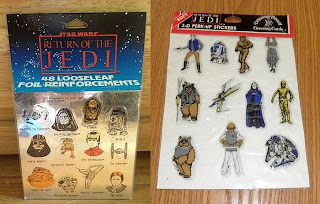 And in my school, stickers were a big deal. They were practically stand-in currency for lunchroom trades. And since many of us (practically every single kid I knew) had sticker books that we were all working on desperately filling with as vast a variety of stickers as possible, a kid with a new sheet of Star Wars stickers could gain a little popularity. Puffy stickers were like gold back then. 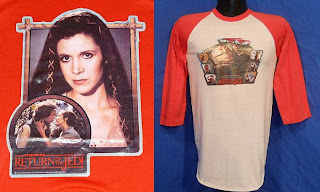 And finally, the most embarrassing part of that very first day of school way back in 1983, was the t-shirt that I had carefully chosen to wear. For some reason, I decided to declare my undying love for Princess Leia by making my mom buy me a shirt with the iron-on graphic you see on the left hand side of the following pic.

Yep. I walked into school that first day with a big-eyelashed image of Carrie Fisher on my chest. Even better, it was actually a baseball-style t-shirt, like the one on the right. Except mine had yellow sleeves. Hell, I can't lie, I wore that shirt until is was practically nothing but threads and Carrie's face was a dim ghostly image, faded from a year's worth of washings.

Sadly, by the time my 5th grade year ended, I would be almost completely over my Return of the Jedi obsession. My toy interests would begin to shift towards other things and then by the fall of 1984, I would leave my Star Wars fandom almost entirely for a while. I would see the Droids and Ewoks cartoons and consider them passe. I remember meeting a kid in 6th grade who would draw these super detailed drawings of AT-ATs and the Millennium Falcon and I'd think he was a tasteless nerd, clinging to a dead franchise.

Don't get me wrong, my love for Star Wars would reignite anew after high-school. But for a while there, I would look back on that kid in the Princess Leia baseball t-shirt, with is RotJ lunchbox and Darth Vader eraser and cringe.

Now I'd give a gazillion dollars to go back to that very day again, and relive every single second of it without changing one little thing.

Okay, maybe I'd pick a shirt with Jabba on it or something. But that's it.